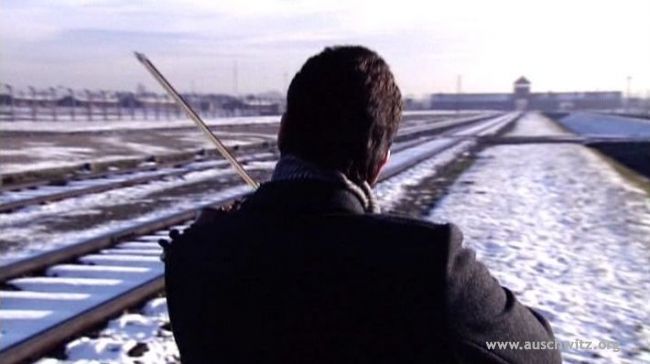 According to polls from the Polish press and the BBC, forty five per cent of British people (and sixty three per cent of people from the United States of America) have never heard of the extermination camp at Auschwitz. It is there that, as people were starved, driven to work, raped, tortured, experimented upon, gassed and cremated, an orchestra was often made to play. What is remarkable about this film is that its makers, the commissioners and broadcasters have recreated this outrage.

The decaying buildings which are billed as the focus of the film are given the MTV treatment (the images of abandoned warehouses, barbed wire and rail tracks are some of MTV’s most famous clichés) – the spaces lit dramatically and profusely, the cameras glide on tracks and cranes or float on steadicams, endlessly jumping around and circling the performers. It is not a film “from”, “in”, “of” or even “on” Auschwitz. Auschwitz is a backdrop – the focus of this film are not the survivors, an exploration of what happened and why (and if forty-five per cent of British people who participated in the aforementioned poll have never heard of Auschwitz, there is an obvious need for this), but the delectation the filmmakers take in their craft, the star-musicians who sell millions of records (and this will boost their sales) and television’s institutionalized pathological presentation of “drama” and “history”. The survivors’ tales are cut to sound bites: into sequences of 35, 35, 40, 35, 25, 30, 35, 10, 55, 30, 5, 60, 70, 30, 45, 30, 40, 35, 15, 15, 65, 35 and 30 seconds respectively (the figures given represent the amount of time each of the four protagonists is allowed to speak for in continuity, but even within these sections the testimonies are often cut together from different material, i.e. they are not continuous). These sequences are grouped in sections whose length are 2′ 25”, 2′ 30”, 1′ 40”, 1′ 30”, 2′ 10”, 3′ 30”, 2′ 40” and 30” and interspersed between musical sequences. The total amount of time devoted to the testimonies is approximately eighteen out of the ninety minutes’ total running time. The lengths of the musical sequences on the other hand, are: 4′ 05”, 2′ 15”, 3′ 00”, 7′ 05”, 3′ 20”, 8′ 50”, 3′ 05”, 5′ 20”, 7′ 20”, 4′ 00” and 10′ 45”, which run at a total of nearly sixty minutes. In such a short period of time, the audience can grasp only the sketchiest of impressions – the only function of the testimonies is to provide a sense of authenticity, like the (even shorter) archive footage or the use of the actual location. Is it not insulting to devote so little time to people who actually experienced the full reality of this situation? What was programmed for the evening of the twenty second that needed our urgent attention? There was the fifty minute Albert Einstein documentary that preceded the film and the thirty minute regular comedy programme ‘Never Mind the Buzzcocks’ which followed it. Could this time have been devoted to the survivors? Or the one hundred minutes that were given to the film ‘The Island of the Dead Birds’ (a dramatised fiction film dealing with the experience of the Ghetto) the same morning?

Perhaps I have misunderstood; maybe the intention was to create a space in which to contemplate the suffering. Exactly how, if people have never heard of Auschwitz, is not clear. The choice of music is relevant: a lot of it is music written by those who personally experienced prison and death camps, there is music commissioned for the film and the suitably neutral Bach, though the choice of Mozart’s Requiem for the opening sequence reminds me of Vatican’s position on the extermination of the Jews, those from the Polish Catholic community who laughed as they saw the cattle trains pass by and the Allies’ (a Christian coalition of sorts) lack of interest in bombing the railway lines (and let us not forget the present Christian coalition’s occupation of Iraq and silence on Israel’s continued occupation of Palestine). Regardless of the choice, music in itself does not have enough integrity – it has to be inserted into Auschwitz – or rather, an image of it which is totally devoid of the reality of the place. In the musical sequences, we are treated to a spectacle of close-ups of stars from the world of classical music: made up (it is not enough to play well, one has to look good), dramatically lit (the place is relatively unremarkable), dressed in black (out of respect) and wearing thick coats and scarves in a place in which so many people died of the cold (we would not want them to have to change their busy schedule because of a sore throat). These sequences use rapid and dramatic cutting and kitsch advertising/pop promo imagery and give no opportunity for the audience to get bored. The filmmakers summon the elements (rain, snow), (time-lapse) roses withering, the sun going down (time-lapse), all of which presumably speak about the Holocaust symbolically (because the actual testimonies are denied a voice and the eighteen minutes provided have been judged to be long enough for those who have never heard of Auschwitz), in fact the cliches enable them to speak without saying anything. However, the absurdity continues: the mouths open, the bows slide over strings, but the music is pre-recorded – like the images, the sound has been ironed, cleaned and amputated from the place (Auschwitz has notoriously bad acoustics).

The relationship between the sound and the image, between the music and the place, between horror and entertainment, between humanity and mechanization, follows the model set by the Nazis. Yet we continue to perpetuate an audiovisual form (the Monoform) which is responsible for the ignorance of, the misrepresentation and slighting of the Holocaust. If for the BBC the drama of Auschwitz is not dramatic enough, we should start petitioning for the revoking of its licence. The problem is that this film was made with the support of CBC, ZDF, TVP, the Auschwitz-Birkenau State Museum, the Yad Vashem Film and Photo Archive, the United States Holocaust Memorial Museum and the Visual Documentation Centre Beth Hatefutshoth. There is no need to deny the Holocaust, for if this is how we are to remember it, they have won.